I had just graduated high school, and was in New York City with the Thespian Club from my high school. We saw Kiss of the Spider Woman on Broadway (it had only been a week or so since Chita Rivera had won the Tony award for her performance), along with the George Gershwin’s musical Crazy for You, Miss Saigon and The Who’s Tommy. I also caught a matinee of Les Miserables and didn’t like it at all, but mostly because of how uncomfortable I was in my seat at not being able to move for the entire first act (about an hour and forty-five minutes). All in all it was fun because we even got to meet a Rockette. She did some kicks for us and told us what it was like to be one of them. I think she also choreographed a dance for us that we ended up doing.

Friday came, and we were all looking forward to going home. We had an open slot in our itinerary, and we were free to do as we wished. We had already been to the observation deck at the Empire State Building, and had been to Ellis Island and the Statue of Liberty. There was talk of going to the World Trade Center, but I didn’t make it there, so I told myself on my next trip I would go. (On my second trip near NYC, in August 2001, even though I had a fifteen-hour layover at Newark airport, I still didn’t go. So, I promised myself I would go the NEXT time I was in NYC. Well, I got back from that trip at the end of August, flew right by them, and I marveled at how close together the towers were. The next month was September 2001, and you know how that story ends.)

I wasn’t sure what I wanted to do that afternoon. There was a huge movie coming out that day, but I had promised my friends I wouldn’t see it. We had all agreed to wait to see it together when I got back.

Then, one of the other guys, Davis, said, “Bill, you want to go see Jurassic Park?”

…And that was all it took.

If it would have been as easy as sending them a text to let them know or calling them on my cell phone, I would have. However, that technology mostly did not exist at the time. Therefore, I had to make a snap decision.

I had been waiting to see this movie since I read the book the spring before, and I remember seeing it at a Smith’s grocery store. (Smith’s is owned by the same company that owns Ralphs – Kroger.) There was a picture of a dinosaur skeleton on the cover. I picked it up. “SOON TO BE A MAJOR MOTION PICTURE,” the cover stated. I turned it over to read the back:

An astonishing technique for recovering and cloning dinosaur DNA has been discovered. Now, one of mankind’s most thrilling fantasies has come true. Creatures extinct for eons now roam Jurassic Park with their awesome presence and profound mystery, and all the world can visit them—for a price.

Until something goes wrong…

In JURASSIC PARK Michael Crichton taps all his mesmerizing talent and scientific brilliance to create his most electrifying technothriller yet.

At once, I was giddy with anticipation. I had never heard of Michael Crichton (though I had seen The Andromeda Strain, I did not know who wrote it), but I knew I had to read this book. So I bought it, and when I got home, I started to read it immediately.

It was the first book I almost stayed up all night to read. I finally went to bed around two in the morning, but I took it to school the next day and read it in all my classes. I was a reasonably good student on good terms with all of my teachers, and most of them were content to let me read instead of pay attention; as long as I wasn’t bothering anybody. My roommate and my brother had the same reaction when reading this book— they couldn’t put it down, and neither of them are huge readers.

From that moment on, over a year before that day in June of 1993, I had been waiting to see this movie.

The poster was released in advance of the movie. It’s simple colors of black, white, yellow and red, and the decision to mimic the art of the paperback were brilliant! (I shudder to think what the poster might look like today— all we would see are the character’s faces with maybe a T-rex roaring in the center.) Yet, it was the tagline that would stand out: “An Adventure 65 Million Years in the Making.”

I could not be more excited for this movie!!

When the soundtrack came out, being a massive fan of John Williams, I went to the 24-hour record store near the strip called Odyssey Records, which has sadly gone out of business. It had been a mainstay in Las Vegas for years. I raced home and put the CD in my CD player, and I am not sure what I was expecting, but the first track threw me; it’s the music that plays over the titles at the beginning of the movie.

By the end of the CD though, I was convinced that John Williams had created another classic score. (Here’s a bit of trivia: the JP theme is the same five notes from his score to Close Encounters, but in a different order.)

When Davis asked me if I wanted to see it, I think I had begun to shake. My entire body became just as alive as it had been when I first spotted the paperback at Smith’s. Every single one of my nerves was quivering with anticipation.

Davis looked at me, waiting for my answer.

I remembered the pact I had made with my friends. I knew I had to say no.

We stood in a line that wrapped around the block, but he and I had no worry that we wouldn’t get in. In an age before assigned seats, we didn’t worry about what kind of seat we would get.

The memory of actually buying the ticket escapes me, and I wish I still had it, but I don’t. What I do remember is being absolutely blown away by the inside of the theater.

It wasn’t just a movie auditorium.

It was a movie palace!

They don’t make theaters like this anymore. Most of them are multiplexes that fit as many theaters as they can into one building. There are bigger auditoriums and smaller auditoriums in such multiplexes, and having never been to a movie palace before, I never gave them much thought.

That all changed in an instant when I saw the size of this theater (for it cannot rightly be described as an auditorium by any means), and the size of the screen…. to try to explain it would be sheer exaggeration. Suffice to say it was huge; the biggest movie screen I had ever seen. (Looking up stats online: the screen was 20-feet tall and 52-feet wide.) Even the theater seats themselves were something I had never seen before. It wasn’t just one big area to sit in. There were curtains and sections with tiny light bulbs to show the way. The closest thing to this I can think of is Grauman’s Chinese Theatre in Hollywood.

Although in my memory, Zigfeld is even bigger.

At last, the lights dimmed. I couldn’t tell you at all what, if any, previews there were before the movie, but I can tell you this was the first time I saw the promo for the new sound system DTS. It was loud and piercing, and hurt my ears. Later in the movie, the raptors would make the same sound, and I would think to myself the raptor’s screeches were the reason they came up with this new sound system.

What did I think of the movie itself?

I loved it. I absolutely loved it. As time went by later, I rewatched it and I would have my issues with it. I may have even thought to myself, “Why the hell this kid was at a dig site in Montana,” and I remember being slightly frustrated with the dialogue that didn’t seem to be 100% edited correctly. I may also have been somewhat bored with the (lack of) character development, but I don’t guarantee those complaints. The first scene was a bit too reminiscent of Aliens with the way the raptor sucked the poor guy into its pen, but…

All of those details fell by the wayside on that June day in NYC.

I remember roaring in laughter when Ellie Sattler and Robert Muldoon are racing away from the T-rex with an injured Ian Malcolm in the back, and Muldoon looks in the side-mounted rear view mirror to see the dinosaur roaring at them. The words: “OBJECTS IN MIRROR ARE CLOSER THAN THEY APPEAR” scream out at us. I remember laughing with glee at the shot of the movie when the Tyrannosaur triumphantly roars in a victory over the Raptors as the banner reading: “When Dinosaurs Ruled the Earth” falls to the ground in the background. 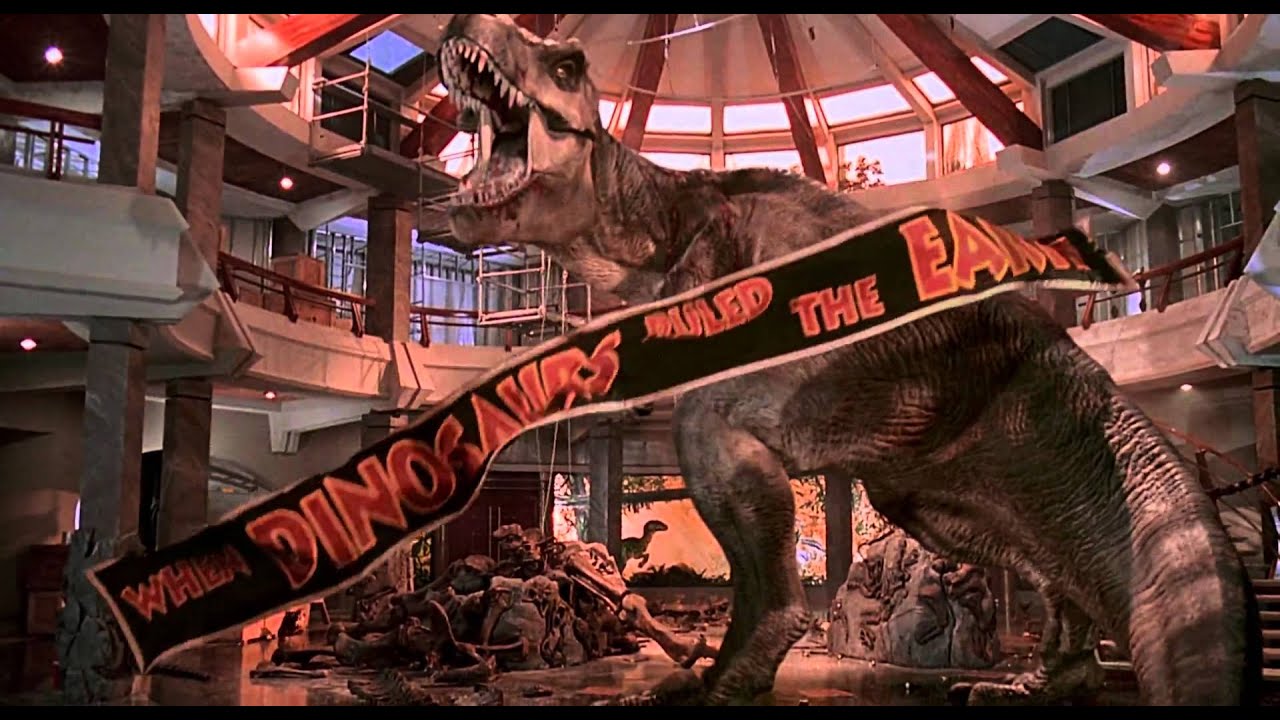 As the movie faded to black and John William’s closing score came up, I was breathless. This was the adventure I wanted to see. Though I am sure my analytical mind had some issues with it at the time, I forgave the movie and its faults at that moment because what it had done well, it had done exceedingly well. It delivered on action and suspense with a few laughs.

When it came to home video in October 1994 on VHS and LaserDisc, not only did I have to buy it on VHS (I could not afford an Laser Disk player), but I also finagled my way into the getting the cardboard cutout promoting its release on home video. “BRING HOME THE BIGGEST MOVIE OF ALL TIME,” it said. It decorated my room for a few years, and then I couldn’t tell you what happened to it.

These days, I wish I could say I could look past Jurassic Park‘s flaws.  When I watch it at home, it’s easier to look past the spectacle. It’s easy to spot the things that were done quickly, hoping no one would notice them.  Spielberg did bring this movie in under schedule and under budget after all, and even despite a hurricane hitting Hawaii, where the exteriors were shot. You can tell on a small screen when you watch it that Spielberg was already looking ahead to his next project. So much in fact that he let George Lucas finish directing.

When I saw it in a 3D release in 2013 to commemorate its 20th anniversary with my nephew, I looked past its flaws trying to see it through his eyes; it held up. Seeing it on the big screen, you can’t help but be overcome by the spectacle, by the excitement, the suspense, and the DINOSAURS! It really is a movie for the big screen.

Today, though there are issues in its story and its character development, there can be no question that the effects hold up. Nor can there be a question at what a turning point JP represented for the film industry.  These days, CGI is the norm, and practical effects and matte painting are relics of, sadly, a bygone era. Jurassic World: Fallen Kingdom, the fifth entry in the Jurassic Park franchise, gets ready for a June 22nd release, and there can be no doubt that our fascination with dinosaurs is just as strong.