Looking back on the horror of 'ALIEN'

Like JAWS, I cannot think of or talk about this movie (or its sequels) without typing its name in all caps.

It has been forty years since we were introduced to the Lovecraftian horror of ALIEN, and even in the hopefulness of new beginnings that is spring (of the dead heat of summer), it’s a movie that continues to make us shiver.

Lovecraftian, of course, refers to H.P. Lovecraft, the god father of modern horror whose works influenced many, including Stephen King. When someone refers to Lovecraftian horror, they are referring to cosmic horror. Oftentimes, the two terms are used interchangeably. So, what is cosmic horror? Well, put simply, cosmic horror is a “contemplation of mankind’s place in the vast, comfortless universe revealed by modern science” in which the horror springs from “the discovery of appalling truth.”

That certainly seems like a fitting description for the crew of the Nostromo in ALIEN. (By the way, the ship in ALIEN, Nostromo, takes its name from a Joseph Conrad novella, and so does the life ship of the Nostromo, the Narcissus. Also, so does the Colonial Marines ship in ALIENS called the Sulaco.). Once the crew of the Nostromo are awakened by Mother because of the space signal on LV-426, which turns out to not be a distress signal, but a warning—and there is almost no hope for any of them. One by one, in various ways, the egg finds its way to Kane and attaches itself to his face…the Facehugger…

…to the Chestburster that rips from his body…

…to the alien that hunts down the remaining crew and they fall victim to the horror that they brought aboard their ship.

The imagery of those ships and the crews first encounter on LV-426, before any hint of the alien has made an appearance, are jarring and unsettling. The scale and the geometry alone hint at technology and a kind of vastness unimaginable by humans. What do I mean by geometry? When you look at those sets and those ships, you will know what I mean. To quote the most famous of Lovecraft’s stories, The Call of Cthulhu, “The geometry is all wrong.” There are almost no right angles in those ships, and you will never realize how comforting a right angle is until you see a shocking lack of them. 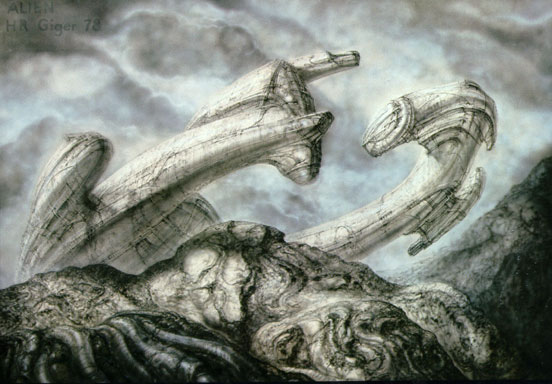 Dan O’Bannon, who wrote the film’s screenplay, has argued that the scene in which Kane meets the Facehugger is a metaphor for the male fear of penetration, and that the “oral invasion” of Kane by the Facehugger functions as “payback” for the many horror films in which vulnerable women were sexually assaulted by male monsters.

The sight of the alien itself is nightmarish, perverse, and abound in sexual imagery.

The shape of the head and the inner jaw immediately bring to mind that of a phallus, but there is something elegant and feminine in the way the creature moves. Like a predator or an insect, there isn’t any unnecessary movement. Although, this is not your lover. This creature moves for one purpose and one purposely only…to kill.

The opening of the egg that reveals the Facehugger is reminiscent of a vagina, but this is not the kind of sex that has anything to do with love. This monster is a perversion of sex and all that could be found good with it. Perhaps that is why the alien itself remains such a prominent figure in Hollywood’s bogeyman.

Ridley Scott directed the screenplay that was written by Dan O’Bannon and Ronald Shussett, and he is the one who brought to life Swiss artist H.R. Giger’s nightmarish biomechanoid with assistance from Carlo Rambaldi, who helped to design the alien’s inner striking jaw and ended up redesigning the head in order to do so. Scott shrouded everything on the set in fog. “More fog,” the actors always remember him calling for, and the copious amounts of KY jelly applied to the alien to give it a more sinister, slimy appearance— it adds to the nightmarish illusion of being in a terrible dream from which you cannot wake up from.

When released, the movie thrilled audiences. At test screenings, the executives thought for sure they had a bomb on their hands when they saw people getting up from the movie, and then never returning to their seats. In actuality, the people were just trying to get away from the movie and were watching it from the back walls of the auditorium.

Also, critics were less than kind to ALIEN upon its release. Roger Ebert gave it a less than a favorable review in 1979, but would later add it to his list of “Great Movies,” ranking it among “the most influential of modern action pictures,” as well as praising its pacing, atmosphere, and settings:

“One of the great strengths of Alien is its pacing. It takes its time. It waits. It allows silences (the majestic opening shots are underscored by Jerry Goldsmith with scarcely audible, far-off metallic chatterings). It suggests the enormity of the crew’s discovery by building up to it with small steps: The interception of a signal (is it a warning or an SOS?). The descent to the extraterrestrial surface. The bitching by Brett and Parker, who are concerned only about collecting their shares. The masterstroke of the surface murk through which the crew members move, their helmet lights hardly penetrating the soup. The shadowy outline of the alien ship. The sight of the alien pilot, frozen in his command chair. The enormity of the discovery inside the ship (“It’s full of … leathery eggs …”).”

In the opening title alone, you see what Ebert means about the pacing, along with Jerry Goldsmith’s brilliant underscore. The movie is so confident with itself that it takes its time, even revealing its title.

James Cameron does a similar thing with ALIENS, but right away he lets us know the pace for his movie is going to be quicker.

Unlike the slam-bang action movie style of James Cameron’s ALIENS, ALIEN demands that you watch it and engross yourself in it in order to understand its full effect. Like all great horror movies, it is not one that can be put on as background noise.

David Fincher, who came to ALIEN 3 after very large sums of money had already been spent on a script by William Gibson that was rejected and on sets that were already built, was saddled with bringing back to the theaters a project that had gone wildly off the rails in order to make a profit for 20th Century Fox.  The result is a mixed bag. It is not as good as either of its predecessors, but it is not as bad as everyone makes it out to be, and it is almost a retread of the original. However, at the end Fincher stays true to the themes of helplessness and hopelessness against the scourge of the alien (and cosmic horror in general) to bring us an ending that—while it is not entirely satisfying in the way Cameron’s ALIENS is— is every bit the ending the series deserves. It also gave us an interesting and fun variant on the 20th Century Fox fanfare.

The ALIEN movies were novelized as a trilogy by Alan Dean Foster, and they are a series of novelizations I highly recommend. He incorporates into them a theme on dreams and nightmares; a theme which totally fits the material, and as a writer myself, I appreciate and applaud how he does this— especially when given someone else’s material to work with.

In the years since ALIEN 3 (and actually even before), Dark Horse Comics launched a line of very successful ALIENS comics, and recently has begun putting out William Gibson’s unproduced ALIEN 3 screenplay. (The dirt on it? It’s good!)

Fox tried to bring new life to the franchise in the late ‘90s with ALIEN: Resurrection, and when that didn’t work as well as they’d hoped, they even tried to combine two of their most famous monster lines: ALIENS VS. PREDATOR. It was a movie that was teased in PREDATOR 2, and a storyline that Dark Horse Comics had brought to life many times.

More recently, Ridley Scott returned to the franchise with Prometheus and ALIEN: Covenenant movies, which try to add to the mystique of the alien, but instead only diminish it. I do not want to know that the alien was created by David or Walter (or whichever goddamn android that was). Like Joker in Christopher Nolan’s The Dark Knight, the Alien works better without an origin story. The Alien is scarier as an absolute—as an entity that sits waiting out there in the unknown or unknowable vastness of the Universe, waiting ever so patiently without anxiousness or apprehension that’s sleeping like Cthulhu in his dead palace in R’Lyeh (that’s some more Lovecraft for you)— and waiting for some inquisitive scientist or astronaut on a thirst for knowledge to peer unknowingly into the vagina-like opening of the egg…

ALIEN is indeed a movie that has withstood the test of time, and there is no doubt that it will continue to do so. For as long as humanity wants to look to the stars and reach into space, there will also be that ever-beckoning fear that by continuing to do so, we may be inviting our own demise.