‘Deadpool’ Does What ‘Infinity War’ Can’t

It’s summer Blockbuster season, and superheroes, like it or not, rule the box office. Infinity War is set to make more money than God, and Deadpool 2 is the biggest R-rated international release ever. They’re the first and third biggest releases of 2018 so far, respectively, and Black Panther is number two (sorry, Solo). Despite both being superhero flicks, comparing Infinity War to Deadpool 2 might seem like apples and oranges. The culmination of a decade of interconnected storytelling where one’s a behemoth cosmic crossover event, and the other’s more of a bloody slapstick extravaganza, or a Grindhouse Tex Avery cartoon. At the core, however, they’re similar: they’re about family, loss, and sacrifice. At the end of the day, they’re two takes on the same genre. So, why does Deadpool 2, a hyper-violent comedy, feel so much more realized than Infinity War, arguably the most dramatic Marvel movie yet?

Fair warning: I’m about to spoil the hell out of both of these movies. 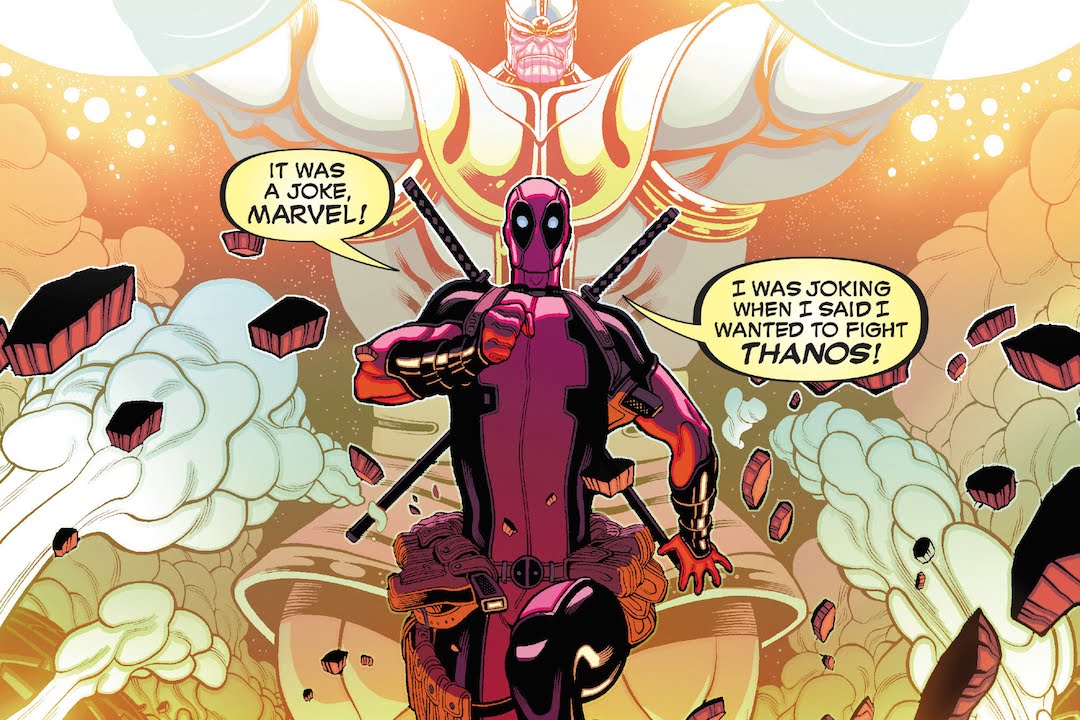 Imagine you’ve never seen a Marvel movie before Infinity War (and you may very well haven’t; try this handy guide we made). You’d be bombarded with dozens of faces, new and old, that never quite explain themselves or their status quos. Thor is in space? Captain America’s a fugitive? Why’s Elizabeth Olsen fucking a robot? Infinity War is a huge spectacle, but without Marvel Studios’ insane worldbuilding, it can’t stand on its own two legs. Deadpool 2 assumes one thing of its viewer: they bought a ticket.

(What about the X-Men, you ask? A superhero neophyte can figure it out pretty quick: heroes, mutants, and outdated metaphors for racism. It’s spelled out pretty quickly.)

Even if you do have an encyclopedic knowledge of these movies, the characters disappoint. In cramming in so many characters, Infinity War gives most of them nothing to do and little reason to be there. For example: Bruce Banner is reduced to nervous jokes and getting in the way; the most interesting thing Drax and Mantis get to do is get fucked up by Thanos’ Reality Stone; and there’s some solid interactions— getting Iron Man, Doctor Strange, Spider-Man, and Star Lord together to butt heads provides some of the movie’s best moments— but many characters feel like they’re just obliged to be there and sell action figures.

This largely isn’t an issue with Deadpool 2, though Brianna Hildebrand’s Negasonic Teenage Warhead mostly pops in to snipe at our hero and take some hits to show how tough people are (but she, and girlfriend Yukio, are a welcome bit of LGBTQ+ representation). The core characters— you know, who we’re supposed to care about— all have motivations and reasons for their actions beyond “I’m here, let’s sell some toys.” Deadpool and Cable are both driven by the loss of family, budding powerhouse Russell has been abused his whole life, and Colossus wants to redeem a troubled man. Sure, the X-Force recruits are no-names who are there to party (poor Peter just kind of showed up), but they aren’t wasted, per se— they’re murdered in spectacular fashion. They don’t last particularly long, keeping them from being a distraction. Their inclusion is the setup to one of the movie’s best punchlines because Shatterstar explodes into a pile of green goo; Deadpool 2 can keep our focus where it belongs.

On the other hand, focus is one of Infinity War’s key issues. It does the worst thing a sequel can: it expects the audience to already know everything, so it can bounce around. What’s Captain America up to with his Secret Avengers™? Avenging, I assume. They’re on the run because Civil War, and you should already know that, right? Scarlet Witch and Vision have their romance, but in juggling Infinity War’s myriad plot lines, it’s a lot of tell instead of show. Rocket helps Thor out because, well, someone has to. Thanos gets a fair shake (he’s pretty much the protagonist, after all), but his Black Order? Not so much. They’re in the movie to menace our heroes, but we never learn anything about them. In fact, only one of them is named out loud, and even then it’s not what you’ll see on his toy packaging (the Ebony Maw, if you’re curious. You know, the one who has all the lines).

However, at its core, Infinity War has a glaring problem: the stakes are meaningless. The ending should be a gut punch. Instead, we watch helpless as nearly everyone disintegrates out of existence. Crowd favorites like Black Panther and Spider-Man vanish without a trace, but there’s little weight to these deaths. Even Spider-Man’s, despite capping Tony Stark’s multi-movie character arc and actually feeling like a real moment, doesn’t last. Yet, this isn’t necessarily the movie’s fault— it’s Marvel’s.

Marvel’s hype machine showed its hand a long time ago. Infinity War is essentially the first half of one story, and just part of the studio’s decade-long plan. We know what’s coming up: sequels for Doctor Strange, Spider-Man: Homecoming, and undoubtedly Black Panther. Those movies are coming, but all of those characters turn into ash before our very eyes. This should be a hell of a cliffhanger, but these characters are all coming back, and we know it. It doesn’t matter that they die because it’s part of the plan (Doctor Strange, in his dying moments, even hints at it). Sebastian Stan has a nine-picture deal with Marvel, but Bucky’s one of the first to go. The hype machine takes the winds out of the sails of what should be a huge, meaningful event— one that quickly became a meme.

Deadpool 2 is definitely smaller in scale, but the stakes have more weight, partially because they’re still surprising. It’s not a victim of its own marketing campaign. (You could even make the argument it’s a bait and switch when it comes to X-Force.) The movie might play the threat for laughs— Deadpool himself announces he’s going to die and takes a shot at Logan, but poor Russell’s struggles with the weight of his powers and Deadpool’s need to protect him are more grounded than Infinity War’s cosmic odyssey. The Avengers fight to save the universe because it’s their job. Deadpool fights for Russell because of his humanity. Though Deadpool’s eventual self-sacrifice (and lengthy death scene) is quickly reversed, there’s a more human element to it than shock value. Deadpool 2 manages to have its cake and eat it, too.

This isn’t to say Deadpool 2 is flawless (the machine gun barrage of jokes can be overwhelming, and Vanessa’s death is a textbook “fridging”), but it’s a breath of fresh air after Infinity War’s self-serious grandstanding. You don’t need the Official Handbook of the Marvel Universe to understand who and what’s on the screen. There’s plenty of fan service to be sure— “African-American” Tom Cassidy, a dig at Deadpool co-creator Rob Liefeld that only a nerd would get, and the exceptional mid-credits scene— but it never weighs Deadpool 2 down. The characters grow and change, which Infinity War doesn’t give its characters a chance to do.

Above all, Deadpool 2 is just more fun. Isn’t that what a superhero movie should be?