Superstar (noun) – 1) a star (as in sports or the movies) who is considered extremely talented, has great public appeal, and can usually command a high salary. 2) one that is very prominent or is a prime attraction.

Both of those define what Burt Reynolds was when he was at his height of fame, and yet neither of them really touch on how bright his star was. Now, with his death at the age of 82 from cardiac arrest in Martin County, Florida, we may have lost the last megastar that Hollywood has. (Certainly someone will argue that—“so and so is also a megastar”—and I say let them.)

Burt Reynolds was a mix of machismo and a smart aleck, wise guy, which is to say he could more than hold his own in a fight, but he was happier to play jokes and pranks. With a trademark grin that his signature mustache only added to, a twinkle in his eyes, and an unmistakable laugh, it was certainly the personae he gave off in a string of hits from the late ’70s to early ’80s. Although, that is not at all to say his range as an actor was limited. 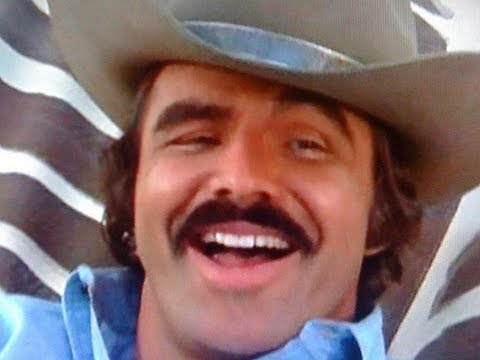 He was equally at home in dramas (Deliverance in 1972), in action (Sharky’s Machine 1981), and musicals (The Best Little Whorehouse in Texas in 1982). However, he will probably be best remembered for his work with Hal Needham: Smokey and the Bandit (1977) and The Cannonball Run (1981).

Reynolds was born in Lansing, Michigan, and moved to South Florida when he was five. In high school, he made a name for himself as a football star and earned himself a scholarship with Florida State University. Injuries would sideline his athletic career, so he turned to acting, though his football skills would come in hand during his role in the original version of The Longest Yard in 1974. (Adam Sandler would remake the movie in 2005, and he would cast Burt Reynolds in his movie.)

He had some small parts on TV shows throughout the ’50s, and in 1961, he scored his first feature film role in Angel Baby. By 1969, he scored his first lead in Impasse, which is directed by Sam Fuller. Around this time, Reynolds was even approached by Albert R. Broccoli to play James Bond, though Reynolds turned down the role saying, “An American can’t play James Bond. It just can’t be done.”

It was a decision he would later regret.

(Other roles he would turn down would include Han Solo and Sonny Corleone.)

In 1972, he was cast in John Boorman’s landmark movie Deliverance, along with Jon Voight, Ned Beatty, and Ronny Cox. The movie, about four Atlanta businessmen who decide to canoe down a river in the remote Northern Georgia wilderness, is famous for its “dueling banjos” scene, and also another scene…

What’s that scene? I will leave it for you to discover. Like the shower scene in Psycho, to tell you what the scene is robs the audience goer and the movie of its visceral thrill.

Later, Reynolds would consider Deliverance “by far” the best movie he’s ever been in.

“I thought maybe this film is more important in a lot of ways than we’ve given it credit for.”

It was the movie that would cement his role in Hollywood as a serious actor, and put him on the map of actors to watch—the first that would cause his star to begin to shine. It was also the beginning of his status as a sex symbol. In the same year, he posed nude for Cosmopolitan, another decision he later regretted because he felt it caused the movie and his fellow stars any chance at receiving an Oscar.

Around this time, Reynolds would become friends with a stuntman named Hal Needham who would write a script called Smokey and the Bandit. By this time, Reynolds had the star power to get it made, and he offered Needham the chance to direct—what they made was box office gold. Reynolds starred as Bandit, who takes a bet to escort a truck full of beer across statelines in the South, which was something that was illegal. The movie also stars Jackie Gleason as the Sheriff (a.k.a. “Smokey”) who is trying to catch Bandit. Also, Sally Field has a very warm role as Carrie, the young bride who has left the Sheriff’s son at the altar, and of course finds herself enamored with Bandit. This would become the second highest-grossing movie of 1977 (second only to Star Wars), and according to his daughter Patricia, was a guilty pleasure of Alfred Hitchcock.

Reynolds and Needham would reteam on several projects over the next half-decade: Hooper, The Cannonball Run, and Stroker Ace.

The Cannonball Run was a veritable who’s who of ’70s stars in Hollywood about a crazy cross country race. It starred Dom DeLuise, Farrah Fawcett, Adrienne Barbeau, Roger Moore, Dean Martin, Sammy Davis, Jr., Terry Bradshaw, Peter Fonda as a biker, and even a very young Jackie Chan in a very small role. To watch these types of movies today, as the stars casually engage in drinking and driving, it is almost impossible to understand what the big deal was. However, they were. The audiences not only loved the movies, but also the outtakes, which clearly showed all the stars having a great time making the movie.

In 1981, he not only starred in Sharky’s Machine, about a narcotics officer in the Atlanta police department after a big-time drug dealer, but he also directed it. The movie was a hit, not only with audiences, but also with critics. Roger Ebert wrote, “Sharky’s Machine contains all of the ingredients of a tough, violent, cynical big-city cop movie, but what makes it intriguing is the way Burt Reynolds plays against those conventions. The result of his ambition and restraint is a movie much more interesting than most cop thrillers.” Another critic, Janet Maslin, wrote, “Burt Reynolds establishes himself as yet another movie star who is as valuable behind the camera as he is in front of it. Mr. Reynolds’s third and best directorial effort is an unexpectedly accomplished cop thriller.”

This was clearly Reynolds’ heyday. In 1982, he starred with another superstar, Dolly Parton, in The Best Little Whorehouse in Texas—which is based on a musical about a true story of a brothel whose madame is on good terms with the local sheriff until a local news reporter decides to make the activity inside the brothel an issue, causing political ramifications for the sheriff.

In 2005, he starred as Boss Hog in the movie version of The Dukes of Hazard, playing the “Smokey” to the Duke brothers “Bandits.”

In 2017, he gave a critically acclaimed performance in one of his last movies, The Last Movie Star, which is about an aging movie star who is forced to face the fact that his glory days are behind him.

Now, we are left without this truly singular performer. There will probably never be another star like him, and if you listen real closely, you just might understand why we can hear that signature laugh one last time.